The meerkat or (suricate, Suricata suricatta) is a small mammal belonging to the mongoose family. Meerkats live in all parts of the Kalahari Desert in Botswana, in much of the Namib Desert in Namibia, southwestern Angola, and in South Africa. A group of meerkats is called a "mob", "gang" or "clan".
Meerkats are primarily insectivores, but also eat lizards, snakes, scorpions, spiders, plants, eggs, small mammals, millipedes, centipedes and more rarely, small birds. Meerkats are immune to certain types of venom; they are immune to the very strong venom of the scorpions of the Kalahari Desert, unlike humans. [2] They have no excess body fat stores, so foraging for food is a daily need.
A meerkat clan often contains about 20 meerkats, but some super-families have 50 or more members. In captivity, meerkats have an average life span of 12–14 years, and about half this in the wild.  Meerkats are born with hair but not full coats, and with their eyes closed.  When they are adults at about one year of age they will weigh around 2 pounds (750 - 820 grams) and stand an average of 12 inches high (30 centimeters). When they are on all four of their feet their height is only 6 inches (15 centimeters).  Like all mongooses, they are agile hunters; however, they differ considerably from most of their other relatives.  Unlike the typical mongoose of which there are around 35 types, Meerkats live in communities and depend on one another for survival. There are three other types of sociable mongooses, the Banded, the Kousi Mansi and the Dwarf mongooses. They also live in groups, but are not usually found in the Kalahari Desert.  While most mongooses are nocturnal, Meerkats hunt during the day. They live at night in burrows, which are complex tunnel systems consisting of mounds, access holes, and tunnels which lead to numerous sleeping chambers. A Meerkat community is called a mob or gang, and can number up to 40. There is always a dominate alpha male and dominate alpha female in each gang.  The Meerkats larger mongoose relatives typically live alone or in pairs. These intelligent animals are extremely communicative and possess a large vocabulary. They flourish in their environment and are not endangered.

Meerkats live in southern part of Africa which is dominated by the Kalahari Desert - The Kalahari spreads over the countries of South Africa, Namibia, Angola, Botswana, and Zimbabwe. The Kalahari Desert has little rainfall and an arid climate with open plains.  It spreads across the Southern part of Africa covering over one million square miles and is 10 times the size of Great Britain.  The land is covered by porous or soft sand that in many places is bright orange in color.  The temperature in the summer months of October to April can reach 115(F) or around 40(C) which can give a sand temperature of 158(F) or 70(C).  In this harsh environment the difference between being in the sun and shade can be up to 86(F) or 30(C).  The winter months from May to September are very different from the summer, you will see highs around 70(F) or 22(C) during the short days and lows at night down to 14(F) or -10(C). Winter is the dry season.

The average rainfall is 12 inches (300 millimeters) which comes between January and April. This is toward the end of the summer. There is little surface water but there is quite a bit of moisture below the sand.  Generally, the broad plains of the Kalahari are covered with a thin coat of different types of grass and thorn scrub.  When it rains during the summer, which is rare, the desert transforms into a lush carpet of plants, grasses, and flowers.

The Kalahari consists of both soft and compacted sands, ranging in color from bright orange to white.  Meerkats like the soft sand when digging for food as it lessens the energy requirements in this harsh environment. However, they prefer compact sand to build their burrows which would collapse in softer sands.  There could be any number of reasons Meerkats flourish in this environment, though all relate to competition for food and predators.  One could speculate that the Meerkat may be a weaker type of mongoose that would find competing for food with other mongooses a tremendous hardship or that their coats would stand out making them easy prey for others. What is known is that Meerkats have specially adapted to the Kalahari, which is described later.  The Yellow and the slender mongooses also live in the Kalahari but generally live in harmony with the Meerkats. This is primarily because they each have a different diet and are not in competition for food. Unfortunately the Yellow mongoose will sometimes eat a Meerkat pup (baby), so meerkats will keep their distance from Yellows when there are pups around.  Many other animals have also adapted over time in order to survive in this harsh environment, making the Kalahari a remarkable and interesting place. Even within this barren and harsh environment, animals and plant life flourish.

Animals in the Kalahari have a 40% lower metabolic rate than their counterparts in other parts of the world.  This adaptation allows animals to survive with less food and water.  Of course, the Kalahari's intense heat puts animals at risk of overheating, making the ability to efficiently regulate body temperature a necessity.  Body size is key, the smaller the animal the faster the loss and gain of body heat.  The "mouse-to-elephant curve" measures this relationship. The general idea is as follows, a gerbil has a 50 times higher metabolic rate than an elephant (per gram of bodyweight); therefore, the amount of energy from food that the gerbil needs to maintain its body temperature is greater than the elephants, making the need for food gathering almost constant.  The Meerkat loses 5% of its body weight overnight making the search for food very important every day.  Can you imagine losing 5% of your body weight over night?  They can also get their fluid requirements from what they eat, so water sources while not a necessity are helpful.

Meerkats have become increasingly popular as a pets and they belong in the wild! Please sign the pledge and or if you can make a donation to help save the meerkat from illegal animal trade. 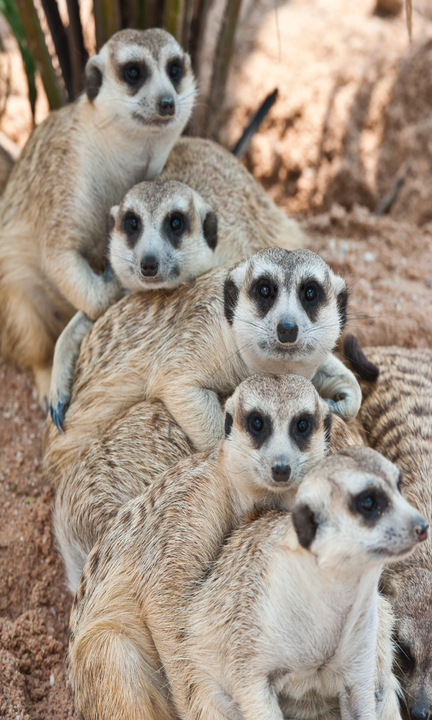 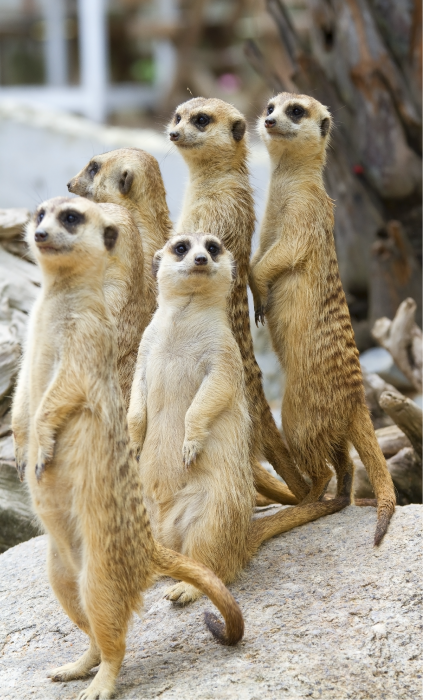 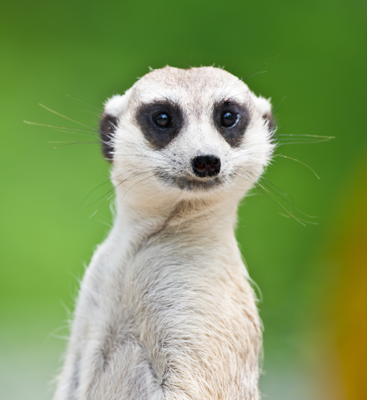